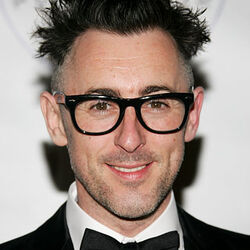 In 2001, he guest starred in the HBO comedy Sex and the City as O the designer in the episode, 'The Real Me'. Also in 2001 Cumming starred in [Spy Kids]. 2003 saw him playing a cameo role in the American sitcom Frasier, playing Niles' yoga instructor. He also guest starred on 3rd Rock from the Sun. In 2004, he starred in Showtime's Reefer Madness: The Movie Musical in which he played the role of The Lecturer – a versatile character who narrates the story and transforms himself into several other minor characters. Shortly afterward, he had a short role in Richard Bell's feature film Eighteen. In 2005 Alan played as Loki in Son of the Mask. He appeared in BBC show, Shoebox Zoo as the humble, kind-hearted Bruno.