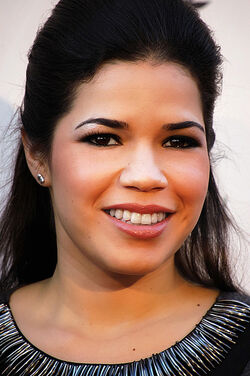 She guest-starred as Natalie Flores in three second season episodes of The Good Wife.

In July 2002, Ferrera made her first TV movie, Gotta Kick It Up! for The Disney Channel. While at drama camp at Northwestern University that same year, she made her feature film debut in the indie sleeper hit Real Women Have Curves. Ferrera followed this with roles in both television (Touched by an Angel) and film (The Sisterhood of the Traveling Pants and Lords of Dogtown). Ferrera received a 2005 Movieline Breakthrough Award. She was also in the movie Plainsong, based on the novel by Kent Haruf which starred Aidan Quinn and Rachel Griffith. Ferrera plays a pregnant teenager, Victoria Roubideaux, who has been kicked out of her mother's house, and she is taken in by two kindly brothers who live alone on a farm. How the Garcia Girls Spent Their Summer came out in 2005, and she starred as the third generation of a Mexican-American family. She played Bianca, a 17 year old who while on the verge on womanhood is fed up with the boys in her neighborhood but finds romance with another boy from a neighboring town. In 2006, she appeared in the short film 3:52 which won the Audience Award at the San Diego Women Film Festival. Later that year she starred in Steel City which received nominations at the Independent Spirit Awards and the Sundance Film Festival.

In December 2005, she appeared in the off-Broadway play Dog Sees God: Confessions of a Teenage Blockhead, directed by Trip Cullman.

She landed the lead role of Betty in Ugly Betty in 2006. Ugly Betty is an adaptation of the Colombian hit telenovela Yo soy Betty, la fea, in which Ferrera portrays a girl whom her peers find extremely unattractive, thus the series title. As Betty Suarez, Ferrera wears braces, has bushy eyebrows and a disheveled wig, and make-up and clothing intended to downplay her own looks, in contrast to most of the "glammed up" characters; Ferrera herself coined the term "Bettification" to describe the process of creating her onscreen persona. The first run of Ugly Betty was completed with the series finale on ABC-TV on Wednesday, April 14, 2010.

For her role in Ugly Betty, Ferrera won the 2007 Golden Globe for Best Performance by an Actress in a Television Series – Comedy or Musical. As a result of the award, she was congratulated by the U.S. House of Representatives as being a role model for young Hispanics. On January 28, 2007, Ferrera won the Screen Actors Guild Award for Best Female Actor in a Comedy Series. She also starred in and was the executive producer for the poignant short film Muertas.

In 2007, TIME chose Ferrera as one of the top artists and entertainers in their "Time 100: The Most Influential People In The World" issue. In July 2007, Ferrera won Imagen Foundation's Creative Achievement Award.

On September 16, 2007, Ferrera won a Primetime Emmy Award for Outstanding Lead Actress - Comedy Series for her Ugly Betty role, the first Latina to win in that category. In the summer of 2007, she wrapped filming on The Sisterhood of the Traveling Pants 2, the sequel to the 2005 film The Sisterhood of the Traveling Pants, as Carmen. Among other film work, she supplied the voice of Astrid in the hit animated film How to Train Your Dragon (2010). She appears in The Dry Land which premiered at the 2010 Sundance Film Festival and ran at the Dallas International Film Festival where it won the top prize in the Filmmaker Award for Best Narrative Feature.

During the 2010-2011 TV season she guest starred on the successful Julianna Margulies-starred CBS-TV series The Good Wife.