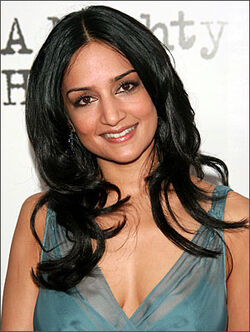 Archie Panjabi (born May 31, 1972) is a British actress, best known for her role as Kalinda Sharma on The Good Wife. Her portrayal earned her a Primetime Emmy Award in 2010 and an NAACP Image Award in 2012, as well as two further Emmy nominations, one Golden Globenomination, and three Screen Actors Guild Award nominations shared with the cast. Her other notable roles include Yasmin Husseini in Yasmin(2005), Pinky Bhamra in Bend It Like Beckham (2002) and Asra Nomani in A Mighty Heart (2007).

In 2016, it was announced that she will star in ABC anthology drama series The Jury as the show's protagonist, Kim Dempsey.[11] She also joined the cast of NBC drama Blindspot.[12]

Community content is available under CC-BY-SA unless otherwise noted.