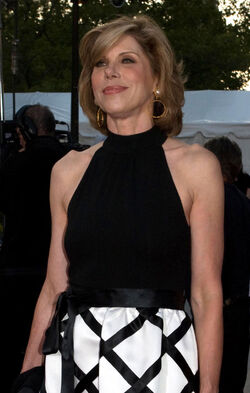 Christine Jane Baranski (born May 2, 1952) is an American stage and screen actress who plays Diane Lockhart on The Good Wife and The Good Fight.

Baranski was born in Buffalo, New York, the daughter of Virginia (née Mazurowski) and Lucien Baranski, who edited a Polish-language newspaper.[1][2] She attended Villa Maria Academy, after which she studied at Juilliard.[3] She has been married to actor Matthew Cowles since 1983. They have two daughters.[2]

Baranski made her Off-Broadway debut in Coming Attractions at Playwrights Horizons in 1980, and has appeared in several Off Broadway productions at the Manhattan Theatre Club, starting with Sally and Marsha in 1982. She has won both the Tony and Drama Desk Awards twice.

Baranski has also starred in various roles in films and television. In film, some of her best known roles are as Katherine Archer in The Birdcage, Mary Sunshine in the musical Chicago, Martha May Whovier in How the Grinch Stole Christmas, Connie Chasseur in The Ref and as Tanya in the musical Mamma Mia!

Baranski was featured as Cybill Shepherd's hard-drinking friend Maryanne Thorpe in the CBS sitcom Cybill, which ran from 1995 until 1998, during which time she hosted Saturday Night Live and won an Emmy Award as best supporting actress in a comedy series along with three other nominations.

In 1999 she received an Emmy nomination for a guest starring role as an intimidating radio psychiatrist on an episode of the NBC series Frasier. She guest starred in The Big Bang Theory as Dr. Beverly Hofstadter, the bespectacled and unemotional mother of one of the protagonists, Leonard Hofstadter.

Since 2009, she has played the role of Diane Lockhart, a top litigator and senior partner of a Chicago law firm on The Good Wife. She was nominated for Outstanding Supporting Actress in a Drama Series for an Emmy in 2010.

As a member of the show's main cast, Baranski has appeared in almost every episode of The Good Wife.

Retrieved from "https://thegoodwife.fandom.com/wiki/Christine_Baranski?oldid=12012"
Community content is available under CC-BY-SA unless otherwise noted.