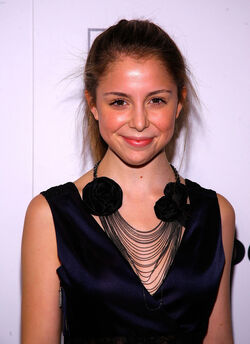 She also guest-starred on ER, the show that made Julianna Margulies famous.

Vega was born in Los Angeles, California to a Colombian father and an American mother. She is the younger sister of actress Alexa Vega. Vega currently lives in New York with her mother Gina Rue (a model), and three siblings. Vega attended Dominican Academy, a private all-girls Catholic school, on the Upper East Side, until June 2012.

At the age of five, Vega appeared regularly as the smallest child of Teddie Cochran (Geena Davis) in The Geena Davis Show. In 2000, she was cast as Annie, the Campbells’ precocious daughter in The Family Man. The following year, Vega was seen again playing Chloe in Made which starred Vince Vaughn, Jon Favreau and Famke Janssen. In 2004, she played Diana Gordon, daughter of Dr. Lawrence Gordon (Cary Elwes) and Alison Gordon (Monica Potter) in the horror film Saw. Her next movie was Sin City, in which she played young Nancy Callahan, alongside Bruce Willis. Vega then appeared in Just My Luck, starring Lindsay Lohan, and also in the summer blockbuster X-Men: The Last Stand as the Prison Truck Little Girl, where she was one of the forms that the shapeshifter Mystique took, as an unsuccessful ploy to fool the guards into letting her go. Currently, she plays Grace, the daughter of Alicia Florrick, portrayed by Julianna Margulies, in the CBS drama The Good Wife.