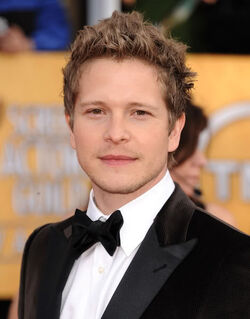 Matthew Charles "Matt" Czuchry(pronounced /ˈzʊkri/; born May 20, 1977) is an American actor. He portrayed Logan Huntzberger on Gilmore Girls and in 2009 began co-starring as Cary Agos on The Good Wife.

Czuchry was born in Manchester, New Hampshire and grew up in Johnson City, Tennessee. His father, Andrew Czuchry, is a professor at East Tennessee State University, and his mother, Sandra, is a homemaker. He is of Ukrainian descent on his father’s side. He has two brothers and a sister.

He graduated from Science Hill High School in 1995. Czuchry graduated with honors in 1999 from the College of Charleston with a Bachelor of Arts degree in History and Political Science. He won the Mr. College of Charleston pageant in 1998. Czuchry attended college on a tennis scholarship, captained the men’s tennis team, and was an NCAA ranked player in the Southern Conference. He took one theater class in college, and his professor encouraged him to change his major to drama.

Czuchry appeared in The WB’s Young Americans. On set, he met Kate Bosworth, whom he dated from 2000-02.

Czuchry had a recurring guest role on the CBS drama Hack and starred in the pilot of UPN’s Jake 2.0. He also guested on Freaks and Geeks, 7th Heaven, The Practice, Veronica Mars and Friday Night Lights.

He appeared in the movies Eight Legged Freaks and Slap Her… She’s French. Czuchry played the lead role in the film adaptation of Tucker Max’s I Hope They Serve Beer in Hell.

He became better known in the role of Logan Huntzberger on the television show Gilmore Girls on The CW.

From September 11 to October 28, 2007, Czuchry performed in Wendy Wasserstein’s play Third opposite Christine Lahti at the Geffen Playhouse.

Czuchry co-stars on CBS’s hit series The Good Wife as young, ambitious Harvard-educated lawyer Cary Agos. Who he played for around 112 episodes.

Following the conclusion of The Good Wife, Czuchry has landed a main role in the Fox drama The Resident as Senior Resident Conrad Hawkins.